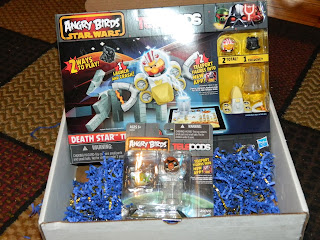 It is amazing to think that it is already time to start thinking about Christmas again. With 3 children it always amazes me the things that are out there these days to play with. Recently I was given a chance to review a new game from Hasbro called Angry Birds Star Wars II Telepods. Angry Birds have been a very popular item in our house since they flew onto the scene, and well we love Star Wars as well so my kids were more then ready to help review this game! 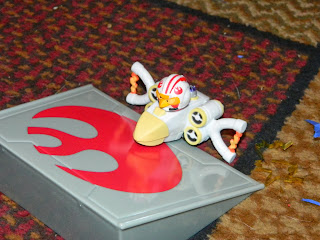 Angry Birds Star Wars II Telepods was so fun, it brought to life the games that the children enjoy playing on the phone, and while we love playing on the phone, sometimes I think it is so important to actually interact with your children. You have different characters that you can launch to take out Darth Pig, and best of all you are able to build and design his evil fortress however you chose to! 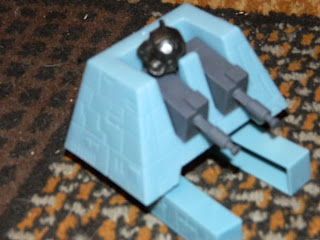 My 6 year old couldn't get it to stand up big and fancy like it the pictures but she really wanted me to show you her evil fortress. :) The pieces are made of a nice heavy plastic and the characters are sort of rubbery so that they do not break when they hit each other. After designing your fortress you are able to pull back on you Angry Bird Space craft and let him fly! Now I will admit, I am not the master at this game and it is a lot harder to hit the target then you would think. However we had tons of fun with it and it kept my children entertained for over an hour each time we have played it!
Another thing I have really enjoyed is the App. Yes you read that right! Angry Birds Star Wars II Telepods has a compatible App that you and your children can play with and enjoy. As I mentioned before my kids really enjoy playing on my phone and even our kindle fire. Now due to the size it is much more fun to play on the Kindle Fire, and no one gets mad when the phone rings lol

So Join The Pork Side and check it out today!
If you would like to take a sneak peak at the App for this game you can do so HERE
To purchase Angry Birds Star Wars II Telepods visit Hasbro HERE, it is also available and many leading retailers.

TELEPODS are not compatible with the original ANGRY BIRDS STAR WARS App.