August 07, 2013
You may remember a while back I posted about some great new PEEPS flavors for the summer. If you missed that post you can head over HERE and check it out. Recently I was given a chance to try these two new flavors. While I have to say I was a little bit leery to try something new I love traditional PEEPS so I figured these were worth a try.
The first one my kids and I tried was the new Bubble Gum PEEPS. 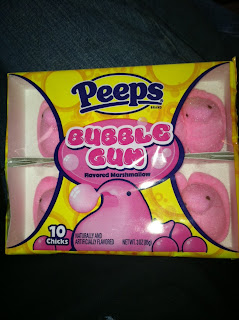 I love that they come in a large 10 pack, because in a family of 5 anything less might have caused a riot.lol I was really shocked when I opened them how much they smelled just like original bubble gum. I have to say these were by far the freshest package I have have had as well. Another fun thing was they are all pink. Unlike traditional PEEPS that are covered in colored sugar, yet remain a white marshmallow.
We really enjoyed these, the flavor was light and sweet. It was so funny my son kept asking if he was suppose to eat it like gum or a PEEP.
We also tried the Sweet Lemonade flavor of PEEPS. It was different, it was the sweet PEEP flavor with just a little taste of lemon, luckily I LOVE lemon and was more then eager to try this one. Unlike the Bubble Gum flavor they only come in a 2 pack so I had to sneak this one after bed time had hit ;)
PEEPS have always been a holiday favorite around here, now we can brighten up our summers to!
*The above mentioned products were received in order to help facilitate this review. Regardless al views expressed are those of my own and were in no way influenced*

Trendy Cyndie said…
wow, I thought Peeps were only available at Easter. Definitely will be looking for these yummy flavors.

Tricia said…
Oh, that is funny how he wasn't sure if it was gum or peep. I want to try both those flavors cause they sound delicious. I love lemon and love bubble gum.
August 11, 2013 at 10:07 AM

Unknown said…
I haven't had Peeps in the longest time! I love anything Bubble Gum flavored, so definitely giving these a try! That is hilarious about your son asking how he was supposed to eat it!
August 11, 2013 at 12:23 PM