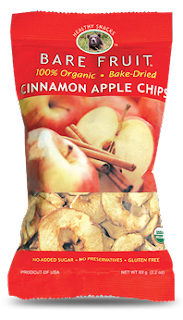 If you are a regular follower you know that as a family we are going Gluten free with the hope of adjusting some physical and behavioral issues. the biggest struggled we have faced is finding a healthy snack that the kids would eat. When I was approached to try Bare Fruit Bake-Dried Apples I crossed my fingers and hoped that they would be a hit in our house. We received a bag of the cinnamon apples to review and I was the first to try them. I was really impressed by how much apple taste was in them and better yet they were not only Organic but they were The dried apples I had tried in the past had either lacked flavor or texture when eating them. The kids were a little hesitant to try them as they are with all new things, but one brave child after another they started to snack and before long they were A HIT! They last week has been great knowing that not only were my kids eating a snack but a snack that was good for them.
Bare Fruit Snacks makes 3 varieties of Apple Chips in both organic and All-natural, but they also make dried apricots, mangoes, and pears. I can't wait to try them all on our path to a health gluten free life! Make sure you check out Bare Fruit Snacks on Facebook and Twitter. Bare Fruit is also offering a giveaway to my fans just click HERE to enter. Make sure you are a fan of Bare Fruit and Something Like Life on Facebook.
You can also scan this tag to have direct access to the app to enter. 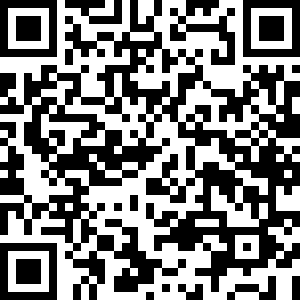 *I received the above mention product so that I may be able to review it. All view expressed are that or may own and were in no way influenced.*

Julia Potvin said…
These snacks sound yummy! I love the taste of apple and cinnamon, great take along snack. Thanks for sharing and I hope gluten free works out for your family,
January 14, 2013 at 6:48 PM

Anonymous said…
I have been trying to find these because I have heard so many good things about them. I think I might have to order them. I love gluten free food that tastes good!
January 14, 2013 at 7:34 PM

Young At Heart Mommy said…
These sound yummy! I only buy my daughter all natural snacks in hopes that it will transition us into healthier eating. I, going to have to give these a try.
January 14, 2013 at 7:52 PM

Melinda Dunne said…
I understand your struggle trying to find good tasting gluten-free food. It sounds like these apples did the trick! Good luck on your gluten-free journey!
January 14, 2013 at 8:18 PM

Jadey said…
This snack looks yummy and healthy and looks like something my baby can eat.
January 15, 2013 at 1:14 AM

Dee said…
We love these and my nephew who is 4 likes this a lot.

October 21, 2012
I know, I know, I have been teasing about this giveaway for 3 weeks now and guess what it is finally TIME! We have had an amazing response from sponsors looking to help our fans have an amazing holiday season. I am pleased to bring you, with the help of My Side of Life this great list of prizes: **Whitening Lightning
~Dial a Smile ($399 value)
~Brow Bar to go ($42 value)
~Super Booster Pen ($79) Value)
~Lip Gloss ($38 value)
**Zee Bra
~Bra ($40 Value)
**Giant Microbes
~Christmas gift pack ($25 Value)
**Rock N Learn
~Sight Words Level 1($20 value)
**Elite Serum
~1 tube ($90 value)
**Favordeal.com
~3 items from select list
To enter all you have to do it use the Rafflecopter below and select which entries you would like to earn. Come back daily for additional entries and don't forget to visit our sponsors by clicking on the prizes above! Giveaway will run from October 21st-November 21st!
a Rafflecopter giveaway
41 comments
Read more