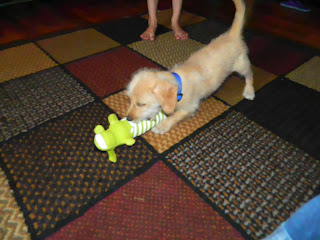 Yesterday morning I was woken up by a text message from my husband. It was a picture of the back of a puppy's head.lol Now none of you really know my husband I don't talk about him a a lot. This is very unlike him to do though. so I give him a call and ask what the text was about. Apparently when him and the guys arrived at work they heard a sound that was well, not so pleasant. They thought that certainly something had been hit by a car and was dying. So the search around to make sure that there is not something suffering needlessly (keep in mind it is 6am and PITCH BLACK!) Finally they found the cause of the sound. A little terrier cross, covered in ticks and riddled with pokies in his feet.  They pick him up and pick all the pokies out of his feet, get him a bowl of food and water(they have a shop dog) and from that second on he was attached to my husbands feet.lol Now my husband loves dogs don't get me wrong, but we already have 3 dogs and 2 cats haha he had SWORE there would be no more pet till at least the two biggest dogs passed on. When I picked up that phone I knew that had changed, and when I got to pick up the puppy (7:30am) he had already been named. So I would like to introduce Sparky to my blogging family :O)

Catherine said…
What a sweet puppy! The poor thing.. I'm so glad the men saved him, and that you gave him a good home.

It must have been a good day for adopting pets. We took in a new cat yesterday. Someone had abandoned him. :*(